The Autobiography of:
​ Tony McFarlane Anthony Mckay
a.k.a
​ Exuma, The Obeah Man

Exuma, the Obeah Man, was born in Cat Island and christened as Tony McKay. He grew up on Canaan Lane, off Shirley Street, Nassau, Bahamas.
Drawing on the traditional Bahamian folk songs, the infectious beat of Junkanoo, ring play, myths and linguistic idioms, Exuma, through his musical recordings, performances and paintings, has promoted Bahamian heritage and extended Bahamian music throughout the world more so than any other contemporary Bahamian recording artist.
Exuma left The Bahamas in the early 1960s to study architecture in New York. After running out of money, Exuma started to perform around New York during the rising sentiments against the war in Vietnam. Soon thereafter, Exuma started to perform, using Bahamian rhythms in the Greenwich Village folk scene.
In the village, Exuma often performed along with Bob Dylan, Richie Havens, Peter Paul and Mary, Jimi Hendrix and Barbara Streisand at the Café Wha on Third and McDougal Streets, Café Bizarre on McDougal Street and Café Bitter End on Bleeker Street — all in Manhattan, New York.
Exuma landed his first major recording contract with Mercury Records, which released two albums by him: ‘Exuma, the Obeah Man’ and ‘Exuma II’. Later, Exuma signed a recording contract with the Kama Sutra/Buddah label, which released four albums by Exuma: ‘Reincarnation’, ‘Snake’, ‘Life’ and ‘Do Wah Nanny’, and the single, ‘Bam Bam’.  In pursuit of artistic independence, Exuma established his own record producing labels, Nassau Records, through which he released ‘Rude Boy’ and ‘Going to Cat Island’.
In the early 1970s a song from Exuma’s first album entitled ‘You Don’t Know What’s Going On’ was used on the soundtrack of the movie ‘Joe’ that starred Peter Boyle and Susan Sarandon.

​               Exuma’s compositions and arrangements are also very much in demand by other top artists. For example, Nina Simone recorded three of Exuma’s compositions: ‘Obeah Woman’, ‘22nd Century’ and ‘Dambala’. Also, Jimmy Castor Bunch recorded Exuma’s compositions ‘Bam Bam’ and ‘Do Wah Nanny’. Many contemporary Bahamian recording artists, including Eugene Davis and the National Youth Choir, have recorded and performed many of Exuma’s compositions, such as ‘Going To Cat Island’, ‘Exuma, The Obeah Man’ and ‘Bam Bam’. As a performance artist, Exuma has carried the unique Junkanoo sounds in his arrangements and pictures of Bahamian cultural life, folklore and myths in his lyrics to the major concert halls of the world. Exuma has performed at Avery Fisher Hall in New York, opening the show for Patty LaBelle; at the Bitter End Club in New York City with Curtis Mayfield; he opened for Rita Marley at the New Orleans Jazz Festival and at the River Boat President; toured with Peter Tosh; performed with Toots and the Maytells at the New Orleans Jazz Festival; opened many times for Sly and the Family Stone, Bush, Spirit, Steppenwolf, X and Black Flag.
Between the years 1978 through 1991, Exuma performed each year at the New Orleans Jazz Festival and regularly performed and toured with the Neville Brothers.
In 1974 Exuma was invited by the Queen of Holland to perform for her with the Edwin Hawkins Singers. Under the patronage of the then Prime Minister of Jamaica, Michael Manley, Exuma was invited to perform in Jamaica in the National Arena in 1975, where he was invited to record a reggae album, under the direction of Clancy Eckles, in collaboration with some of the leading Jamaican recording artists. In 1982 Exuma was invited to perform at the Nancy Jazz Festival in Nancy, France, along with the Neville Brothers. Exuma’s contribution to Bahamian and Caribbean music was recognized by Her Majesty Queen Elizabeth II in 1978 when she awarded him the British Empire Medal. Exuma is also the recipient of The Bahamas Tourism Award.
As a self taught painter, Exuma paints in oils scenes of everyday Bahamian life – children shooting marbles in the yard, a man on the dock enjoying a kalik beer, etc. In 1992 the Baltimore Museum authenticated Exuma as a folk artist. His paintings have been exhibited in 1990 at the Key West Lucky Street Gallery in Florida, in 1990 at the Piccadilly Restaurant, Parliament Street, Nassau, Bahamas and in 1993 by Antonius Roberts at the Bay Gallery, Bay Street, Nassau, Bahamas. Exuma’s paintings have been purchased by many art lovers, including the well known movie director, John Demme, director of Silence of the Lambs. Exuma conveys the mystique and beauty of Bahamian life as stunningly in painting as in song. A Bahamian visionary, humanistic philosopher and people’s poet, Exuma gives expression to the beauty and power of the cultural life of The Bahamas — the people’s every day experiences, folklore, myths, stories, Junkanoo, rake ‘n’ scrape, pain, joy, struggle and survival.
​His life and art reflect the wonderful cultural heritage and personality of Bahamians, drawing on the roots of Africa and the branches of the Amerindians, Europeans and Americans.
-Alfred M. Sears 7th September, 2013
​ 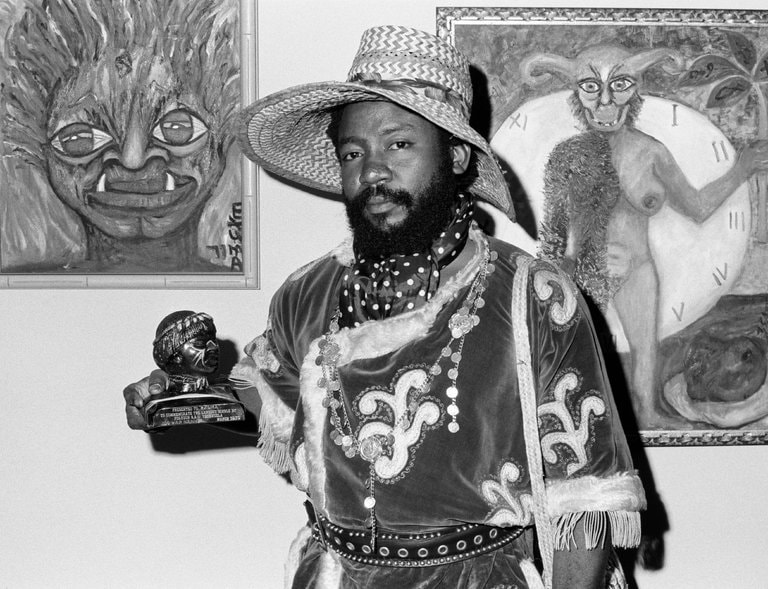